It was June 6, 2019. I had just graduated from Gandhi Fellowship after two years in Gujarat. I along with three other Policy Action Fellows(PAFs), in the first ever cohort, was invited to Sanskriti Kendra, nestled outside the city limits of Delhi for our induction. I had heard a lot of good things about Indus Action (IA) and its work before joining and knew I had to be my best from the first day itself. I was scared and excited both as I was about to start a new journey.

The Induction really set the tone for me. All the team members coming together making the PAFs comfortable was amazing. This culture is really one of the hallmarks at IA: making new comers comfortable and special. 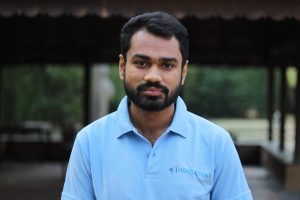 For those of you who are not aware of the structure of the fellowship, it is divided into three parts. The first part is of three months where you are allotted a function/vertical based on your past experience/ expertise; next six months is state stint where you are supposed to either support a state representative in a state or on your own represent IA operations in a state; last three months you can join a function/ vertical of your choice.

I joined the Communications/Brand Development Function and was mandated to review IA’s domestic media strategy in the last six years and provide suggestions to make the process better. My first and most important takeaway after talking to all the state representatives was that media stakeholders were not prioritised by the state teams. In all the plans, Government and Civil Society Organisations took bulk of the bandwidth and media was often neglected. My main task in the three months, therefore, was to build legitimacy around media as one of the key ‘stakeholders’ in state operations.

I loved closely working with the zonal and state representatives to put together the missing communications piece in state operations. I recommended decentralisation of communications and prepared zonal media goals in collaboration with state teams. It was absolutely critical to tap vernacular media space in states to amplify our impact. One cannot expect English articles to do well in a district in Odisha or a hindi article to do well in a Kerala district; going local with the media was the way forward.

During this time, the  IA Delhi office was shifted from Jor Bagh to Lajpat Nagar. We were asked to work from home for three straight days in the interim. I must admit, I completely hated the experience. I like to call myself a people’s person; I love to be around people, working in collaboration and having random conversations. Fast forward to September, as fate would have it, I shifted to Gujarat for my state stint and it is 8 months now, I am still working from home! Oh life!

One of the highlights of the first three month stint was the annual event stepback. During the stepback, the entire team takes time to ‘step back’ and reflect on the work done in the last one year and at the same time tries to deepen bonds among each other. Usually, a ‘conflict zone’ is chosen as a setting for the stepback.

We went to the Naxal affected Gadchiroli district in Maharashtra for the 2019 stepback . Prakash Amte and his family hosted us for 10 days in the beautiful and serene Lok Biradri Prakalp,Hemalkasa. It was truly an epitome of calm in the midst of ‘conflict’ all around. 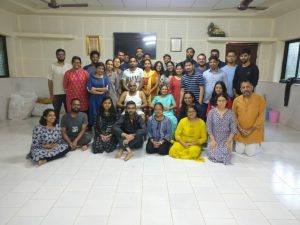 In the last few months of Gandhi Fellowship, I used to always say how I will miss Gujarat and Gujarati people and might never come back again here. As luck would have it, I was back in Gujarat in mid-September as the de-facto State Lead for IA in the state.

During my stint, I managed Government Relations in Gandhinagar. I worked with Directorate of Primary Education for smooth implementation of RTE sec 12(1)(c) with a focus on micro-targeting strategies for Children With Special Needs(CWSN); and Commissionerate of Women and Child Development on the impact evaluation study of Pradhan Mantri Matru Vandana Yojana(PMMVY) in two districts.

It was very difficult initially. It was a new city, and I was supposed to work all alone. Picture this contrast: for two years in Gandhi Fellowship, in-person team meetings and debriefs with other fellows was a weekly affair but here I was all by myself in the state with other team members nothing but a rectangular box on Zoom calls!

First two months were extremely draining. On the one hand, I was figuring out my way to survive in isolation from other team members, and on the other hand it was intimidating to suddenly make the shift from working with block/district officials before (Gandhi Fellowship) to Directors/Secretaries of the state now.

I slowly found my feet, and navigated through the challenges both at the personal and professional front. I still hate working from home, though!

Because the whole setting was so challenging, the learning was steep too. I got to learn the various facets of policy formulation and why various policies have certain implementation bottlenecks and are very difficult to fix by design. My experiences in micro-targeting Children With Special Needs (CWSN) for RTE 12(1)(c) admission has given me lot of time to reflect on what are the demand side challenges and how it affects the supply chain (read: affirmative action by the Government in the form of making school infrastructure more accessible).

I would like to specifically write about two highlights from my state stint that still make me smile and fill my heart with pride. In 2019, IA diversified its rights portfolio to include RTF (Right to Food Security) in addition to RTE (Right to Education). I was entrusted with the responsibility to collaborate with the Commissionerate of Women and Child Development on an impact evaluation study of PMMVY in Gujarat. I was ecstatic when Gujarat became the first state out of the nineteen where IA is operational to get a Government sign-off on the research study. Early on in my state stint, this small win gave me a lot of confidence, and I knew deep inside that I belonged to the big stage. It was now not a matter of ‘whether’ for me but ‘when’. I had no choice but to learn patience and perseverance. There were days, even weeks, without concrete outcomes to show but working with the Government you need to make peace with this fact and learn to play the waiting game.

Next achievement was the event West SDG. This is also my highlight of the year. Some background: IA in 2019 started a flagship annual event Sustain. Develop. Grow. (SDG) set on the first 3000 days of a child. After the national event in October 2019, all the four zones also had to do regional events to localize the learnings and initiate dialogue on the first 3000 days at the regional level away from New Delhi.

Ahmedabad was the chosen location for West SDG and as I mentioned above, I was the only IA representative in Gujarat so I had to take a lot of execution responsibilities for the event. I still remember this scene vividly: it was January 8,2020; just before the start of the event at 9.50AM during the final team hurdle I said I feel “butterflies in my stomach”. Last time I had the same feeling on the day of my first board exam in Class 12th! It was a crazy day. When I look back at this day, I feel both pressure and pride. 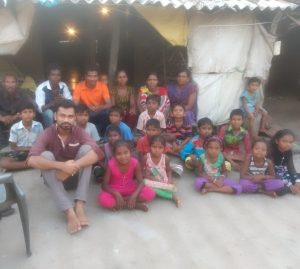 In Picture:Satyam with kids in Gujrat

At this point in my career, I must admit I am a bit confused. There are times when the disappointment of not being able to solve the ‘problems’ around me in entirety hits me hard; there are other times when I feel happy in solving a problem faced by a family during community visits. Is it always important to solve a million problems at one go to call it ‘impact’? Is it not enough to have a feeling of contentment by solving a particular problem of a family?

My experiences with two organisations that work at scale (read: Piramal Foundation and Indus Action) has made me disillusioned at times. I am unable to make sense of the quantity vs quality dilemma of ‘impact’ in my mind. There have been moments when I have not been able to see the ‘direct impact’ of my work at the end of the day and have questioned myself. I am still grappling with the idea whether small is beautiful or scaling is the only logical way to solve public problems.

I have come to realise that the most powerful ideas to solve public problems are not needed to be ‘out of the box’; what we need is to have keen eye for practical, doable and feasible solutions already happening in some other part of the country or the world. I have developed a hypothesis based on my experiences: being in the system gives one the best possible leverage to approach a problem from all perspectives.

I strongly believe systemic impact is best guided by people within the system based on my experiences with officials from a cluster level manager to the secretary of Education in the state.

My last stint also coincided with the Corona scare in the country. I had to stay back in Gandhinagar and work remotely. IA rapidly moved to a Rapid Response campaign when it was clear that lockdown was having a disastrous impact on disadvantaged groups across the country. The campaign was around facilitating food and essential services to the most needy across the country through Government and Civil Society collaborations. The hallmark of this campaign was the inherent belief in ‘togetherness’ to solve this gigantic problem; we adopted the volunteer based model to quickly rally support for the cause.

I was part of two teams in this campaign. I along with two other team members led the campaign in Gujarat and at the same time was part of the media team for all kinds of Campaign communications on behalf of IA.

The highlight during this stint was the faith shown by the entire team on me. One particular example worth sharing is everyone’s follow through on my idea of a Twitter campaign where we were supposed to express solidarity to our idea of togetherness through volunteerism to fight the Corona scare. Everyone in the team suffixed ‘#Volunteer’ in their twitter names and it became quite a hit in the ecosystem too. I got inspiration for this campaign from the 2019 #MainBhiChoukidar campaign of the Bharatiya Janta Party on Twitter.

This experience gave me confidence. Perhaps, my biggest motivation factor is trust shown by team members on me and experiences like these really push me harder to think out of the box, and deliver.

The Corona scare is still not over and there is a lot that is needed to be done. Perhaps this is what life is all about: a never ending juggernaut of obstacles that we turn into opportunities. As my favourite poet Keats says, ‘a thing of beauty is a joy forever’. I think I have a year of ‘beautifulness’ under my kitty now!

Of Privilege, Passion, and Perseverance: Redefining the ‘Action’ in Indus Action

Deepak’s Project ‘Readiness’ to his ‘Uber-quitous’ presence: Celebrating a year of excellence