Hope you all are doing well!

With the relaxation of lockdown norms, state governments are facing massive deficits due to the complete shutdown of industries, trade, supply chains, tourism etc. In desperate attempts of recovery, states are initiating cost-cutting measures and imposing heavy taxes on diesel, petrol and alcohol. Given that migrant workers are returning home, the informal economy is also expected to take a hit in most cities. Despite instructions to reopen NREGA work in April, there has been a drop of 82 per cent in the number of people employed compared to last year.

As we attempt to flatten the curve for COVID, State Governments are facing a much bigger problem of assuring all Indians access to livelihood and income security. 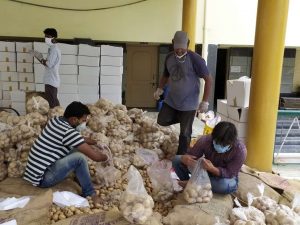 In the past month, Indus Action with an amazing team of volunteers has been involved in making calls to over 10000 families, helping over 3200 families access food, ration and healthcare. Of these families, 618 families were in immediate need of food, close to 1526 had lost employment as a result of lockdown. Out of 3124 families which were eligible for one of the Garib Kalyan Schemes, 824 had not received any benefit. Please refer Annexure for state-wise data.

Actioners of the week

Another week of gratitude and inspiration where our volunteers led the mission from the front and ensured last-mile delivery of welfare benefits to vulnerable families across the country.

Shruti and Usmita, part of the Data Analysis Team, analyse all the data that is collected and sets up our dashboard for advocacy and create frameworks for qualitative data analysis respectively. Parthavi from Team Uttar Pradesh, supported migrants stuck in Bihar to access to an instant cash transfer. Suvidha Jain who helped several migrants and vulnerable families get access to ration and medicines.

Grooving along the Edges at ‘Home’: Neha talks Culture at Indus Action