The adaptation story of Samaaj 3.5% in Chhattisgarh : The cohort of Hope, Progress and Change

Indus Action adopted the model of nurturing community leaders, initially through its Shiksha Sahyogi model and then through its first set of champions in Delhi that graduated in August 2021. Instead of establishing a new system, Samaaj aims at renovating the existing structure through its community champions by polishing their skills to help communities get access to welfare entitlements and rights. Champions are the eyes and ears to the ground, and without the knowledge transfer from the ground, advocacy efforts will be futile. Samaaj manifests a platform where NGOs, CSOs, Governments and the citizens come together to work as a collective for the betterment of communities.

Though Chhattisgarh hosted its first cohort of Samaaj in 2022, the crux of Samaaj was implanted in the state since the onset of Indus Action’s operations here. Since 2017, where our operations in Right to Education were initiated, we have had volunteers and interns to support our campaigning and create a fully functional grievance redressal calling bank. The essence of community leadership was highlighted by our volunteers during the Rapid Response efforts during the pandemic. We organised weekly sessions to build the skills of our volunteers for two months and these virtual camps were crucial in the later stages of recruitment of champions for cohort-1 in Chhattisgarh.

We had 7 community champions from various walks of life joining us from 3 districts of the state. The concept of the project is to instill skills and leverage strengths of the champions so that they can identify their communities and work towards the cause they choose as community leaders. 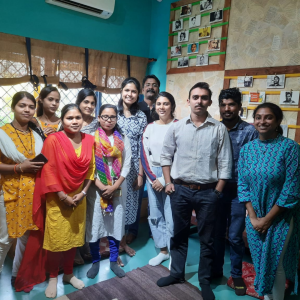 The program ran for a seven month period, and each champion was mapped to projects that the Chhattisgarh Team was doing on ground. Along with that, the champions were given opportunities to learn about community engagement, the Constitution, local governance, policies and rights. The humility, eagerness to learn and the idea of service for the community that the champions brought to the table has been commendable. As mentors, we all have also tried to imbibe those qualities while engaging with various stakeholders.

The step to find the right ‘Champions’

The recruitment involved two stages with an application form that involved short essays elaborating applicants’ prior experiences and motivation to become a community leader. The selection process followed a rubric that assessed their commitment to learn, ability to work in a team and passion to drive change in the communities. Team Samaaj found promising candidates, who showcased a sense of ownership and willingness to drive social change possible in one’s capacity.

Overcoming personal struggles to be a Champion 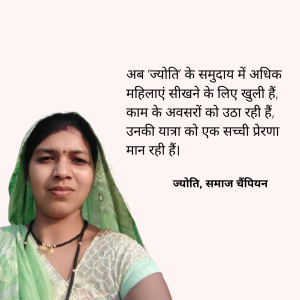 Jyothi Kshatri: A true inspiration to the women in her community

Jyoti, mother of two kids, was asked to leave her home since her close associates in the family were against the idea of a woman going to work. Married at a young age, she could only study till 10th while the desire to study & independently work was still alive. Few months into the program, Jyoti was mapped to fieldwork under the labour project, and with grace could excel in the assignments she took up while taking care of her kids. Things turned out for the better, with the family extending support to Jyoti and welcoming her & kids to home. Now more women in her community are open to learning, taking up opportunities of work, considering her journey as a true inspiration.

Beyond targets, our aim was to pave the way for 7 impactful stories in communities via the 7 Champions of Chhattisgarh. The champions came with innate skills and areas of development.

At the beginning, the aim was to build a culture and safe space among the champions, as many of them came with no prior work experience. This was achieved through regular check-ins, capacity building sessions, exposure visits, in-person meetings etc. Secondly, there was a need to familiarize the champions with the existing projects in Chhattisgarh and how they can relate to the outcomes of the activities at the end of the 6 months.

Two of our champions, Uma and Lata, have been associated with IA’s RTE 12.1.c operations and grievance redressal calling previously. A few of our champions were involved in the labour surveys (under labour project) in Rajnandgaon district (near Raipur) before the program, with Harish, a champion, being the volunteer coordinator for our partner organisation Jan Kalyan Seva Sanstha (JKSS).

Bright spots of our achievements

The plan for engaging champions for 6 months was in place, which included field visits, external sessions, team meetings etc. The first exposure visit was to Khairi village in Rajnandgaon, 2 kilometers from close to Maharashtra border, to understand the grassroot engagement of Samgra Srishti Samaaj Sevik Sanstha on forest rights, aiding children in accessing school education, voicing rights to construct roads and addressing the issues of water & sanitation. 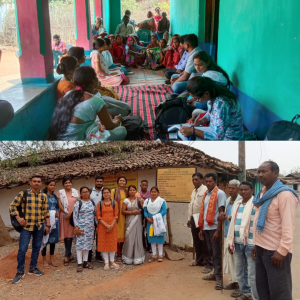 Glimpses from the exposure visit at Kahiri Village

Champions were integral in creating extensive awareness about the Labour benefits, (Board and construction workers and Unorganised Workers schemes) eligibility, documentation etc. in their respective communities. Their observations pointed out the challenges in fetching income certificates from Sarpanch and ward councilors, gaps in official processes. They could find alternative solutions & demanded more accountability from concerned authorities to support the end-to-end welfare delivery.

Interaction with labourers and their families. Champions conducting awareness campaigns and helping the labourers in filling up forms.

By mid of May 2022, through frequent awareness drives and registration camps, champions accomplished 2100 scheme linkages whereas 400 labourers received their new labour cards. The young cohort could see the impact of their work and the satisfaction of citizens receiving the welfare benefits because of the interventions they could be part of, overwhelmed each one of them.

The learning curve of this cohort has been steep, not just in their skills, but the way champions identified themselves as community leaders. Champions have chosen multiple pathways to continue what they began with Samaaj. Some of them aspire to do interventions in areas of elementary education, menstrual hygiene, livelihood etc.

Two champions, Lata and Harish, have submitted their individual project proposals to the organisation. Aarti continues to work on Right to Livelihood in collaboration with JKSS whereas Prabhat is setting up independent camps to streamline the scheme linkages in his community.

The young cohort reflecting on their Samaaj journey with Lakshmipriya