In this article, Vijayshri, Shashank & Adithi, (Azim Premji University students) interning with Indus Action, talk about their experience of co-creating the space to listen and interact with vulnerable families staying in the suburbs of Chennai, Tamil Nadu. They look back on the skills they gathered in managing and identifying gaps, as well as the challenges they personally faced while doing field visits for RTE 12.1.c admissions in Chennai.

I was trying to paint a picture of an urban slum in Azeez Nagar, Chennai. A congested street in Kodambakkam, a place where you can find movie stars, politicians, and the obvious disparity. Makeshift houses were lined with hoardings of various political parties and leaders, where families were busy doing their daily chores. And approximately 500mts into the lane one could see an Anganwadi center, crowded with children and women. A little further is the government e-Seva center, located opposite the railway tracks.

Kalyani’s (resident of the urban slum neighborhood) request to have filter coffee distracted me from my thoughts. I was at Kalyani’s home for a field visit. This was the second time we were visiting her and this time to make her aware of the Union government’s provision on RTE 12.1.c. The objective is to guide her on the application acceptance process for the various schools covered by the RTE near the neighborhood.

The application for her son, with the few documents they possess, has already been done, but there is a problem. Kalyani and Sankar (her husband) both do not have the complete set of documents to complete the RTE application. And in order to compile the set of documents such as caste certificate, income certificate, PDS or Ration card, or a gas connection – each one requires the other, which has her constantly running from pillar to post, at the risk of losing her daily wages as a domestic worker each time.

With a lot of struggle, we applied for Sankar and Kalyani’s Adhaar card from the nearest E-Seva center. Both of them didn’t have any documents which mentioned their caste and were worried that their 4-yr old son would miss out on education because of their lack of action.

With no caste certificate available, and no Aadhar for the child, we had to apply for her son’s admission using an acknowledgment slip of an income certificate application in Sankar’s name as only his bank account and passbook could be used as an address proof and proof for income.

It’s strange that people with big hearts are a rare find. Those who make the bedrock of life, those who enjoy being a resident of the big cities struggle throughout their lives, for every single day because that is all they can afford to do. Those who smile, who welcome, who are warm, and for good reason, question if life in hell is life at all.

Shashank listens to the pain points of Hamsa and family

The plan was to engage with some families from disadvantaged sections (not-well-to-do) and understand their concerns and lifestyle in general. I, along with my fellow mates, met a family in one of the urban slums in Azeez Nagar, located in the suburbs of Chennai.

We spoke to Hamsa, who is in her mid-50’s, formerly worked as domestic help, and is now taking care of her three grandkids. Hamsa moved to chennai after getting married at the age of 13 and has lived in the same locality for almost 45 years now. She really likes Jayalalitha (Former Chief Minister of Tamil Nadu) and when we asked her why, she couldn’t offer a compelling reason for it.

Hamsa has two daughters, Sumathi and Mahalakshmi. Sumathi suffers from acute kidney malfunction due to which she is bed ridden and undergoing dialysis. Mahalakshmi is a domestic help in the neighborhood who is the only earning member to support along with the pension that Hamsa receives (which she says has become irregular). 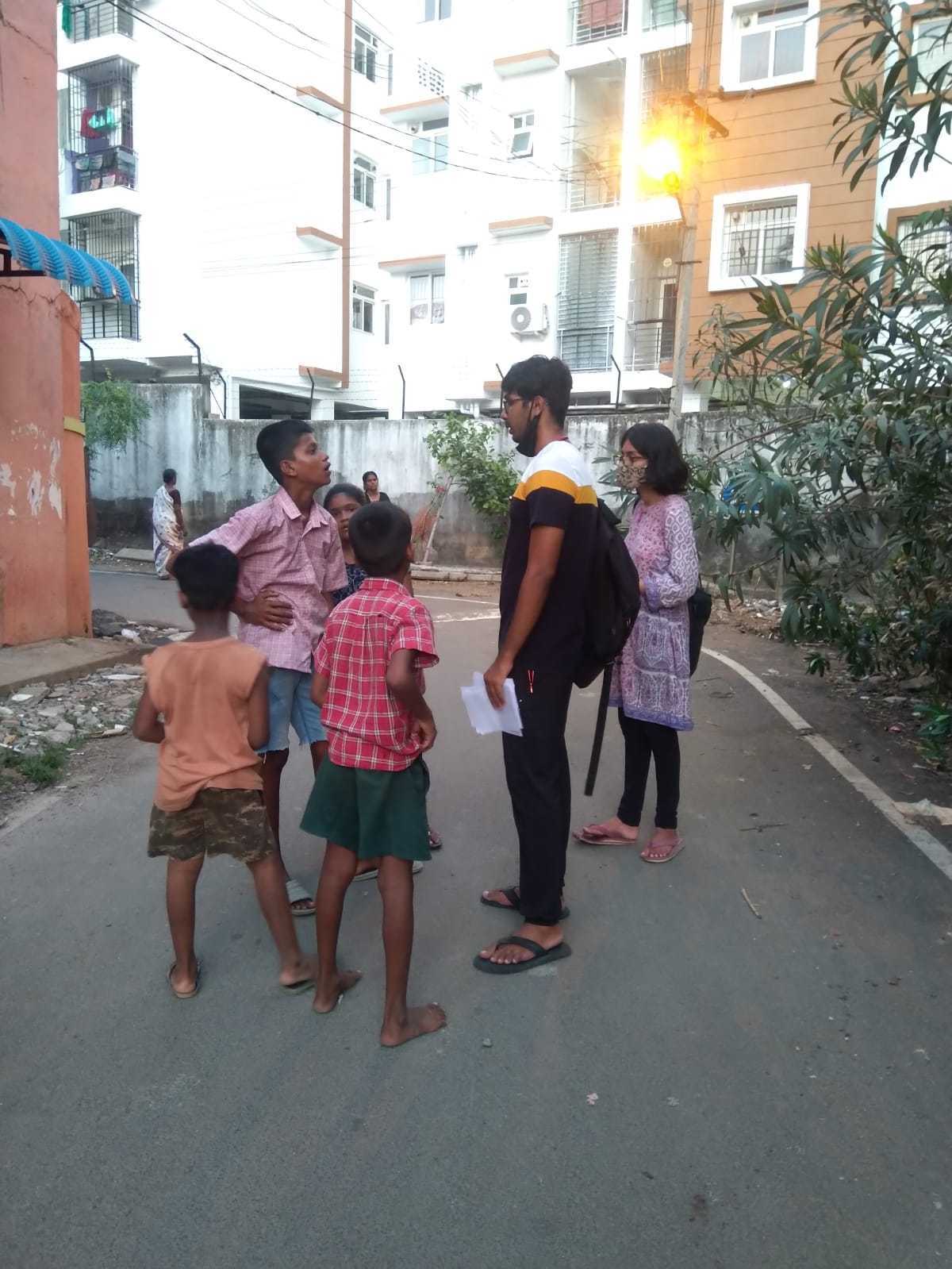 7 Shashank interacting with kids while being on RTE 12.1.c awareness campaign in Chennai

Hamsa and Mahalakshmi could merely support their family during the pandemic as their income was not regular and they didn’t have houses to go to for work. The women of the household told us about how they try to avoid openly talking about their hardships in life in-front of their children so that they don’t feel helpless.

Sitting at the office in Chennai, I often wondered what it was like to be on the other end of the helpline call functioning for the kids to get admission in private schools under RTE 12.1.c Act of the union government. As a parent, you depend on NGOs and external support to know your eligibility, file the application, go through the lottery system and then get the admission in the desired private school. The process was long and sometimes exhausting. But the objective is to exercise the right to choice of education.

Making calls throughout the day would feel monotonous at times. However, my own rather not-so-great and short experience in Government schools coupled with the thought of someone having a choice to get into a private school within their vicinity drove my motivation to get more and more eligible parents onboarded under this Act.

The mixed outcomes of the helpline calls had an unsettling effect. Few parents were eligible but did not have the right set of documents hence, did not want to pursue, while few did not have private schools in the denoted distance, and parents not being able to send their kids to school. A number of callers had explained their challenges of school demanding fees for uniforms and books which was the reason for their child to drop out. They said, “If I pay 3000-5000 Rs more to the existing ask, I can admit my child in any other private school of my choice, then of what use is the scheme for me?” and I could only escalate these issues with my managers to address. 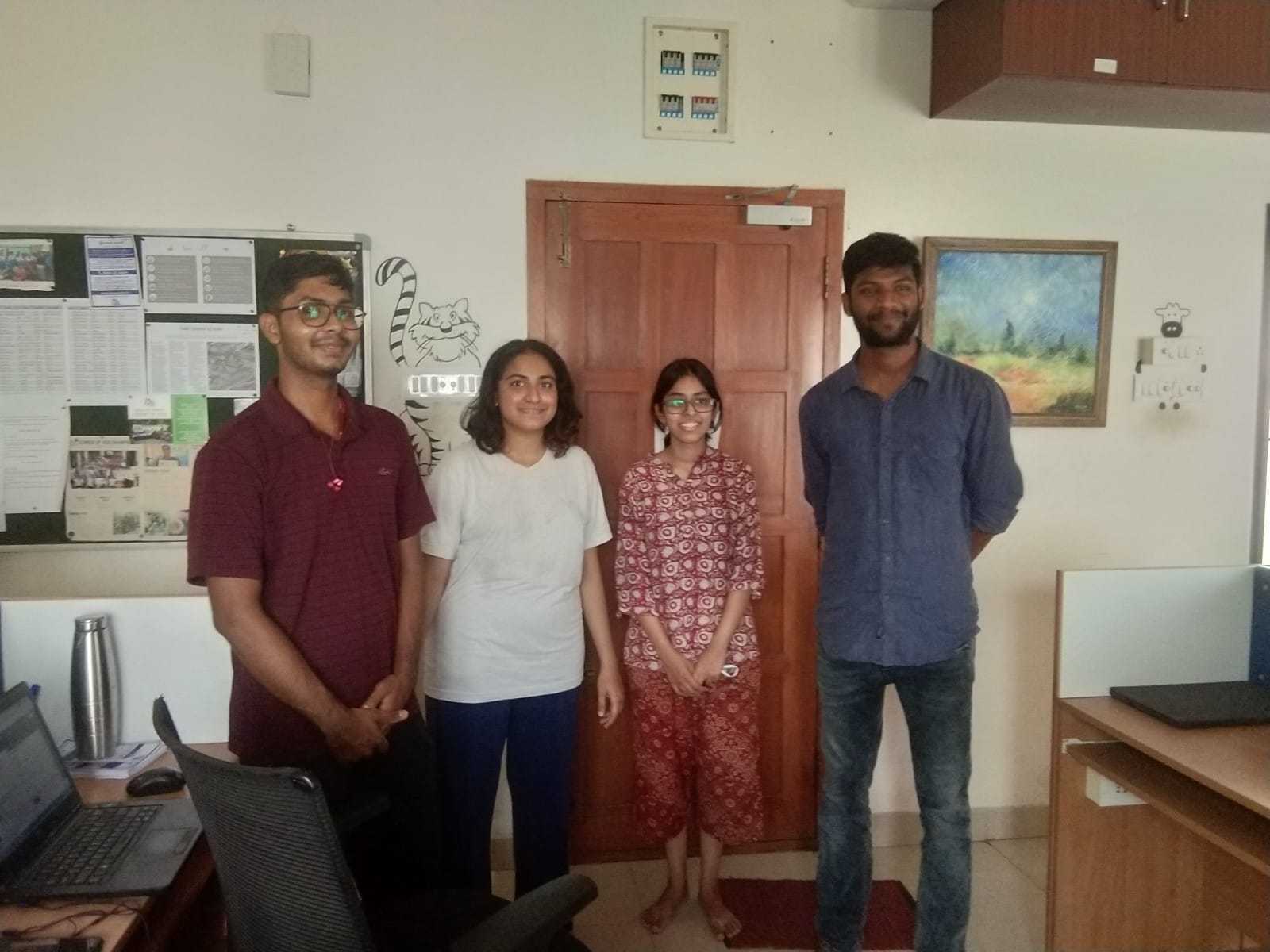 Apart from calling functions, I along with a group of interns were also allocated some Anganwadi centers to build ground awareness amongst the parents. One could witness the sheer determination and desperation in the mother’s voice. They unanimously said, “At least my child should not be prone to the life that my family faces currently”. The hope for their kids to transition from just surviving to becoming better citizens through the mode of quality education was inspiring.

Blog contributions by Shashank, Adithi and Vijayshri. Names of the family members interviewed during field visits may have changed for privacy purposes

The adaptation story of Samaaj 3.5% in Chhattisgarh : The cohort of Hope, Progress and Change