Union Budget 2022 – Assessing what was amiss

In a poverty-stricken nation like India, the annual Union Budget is viewed not only as a financial document but as a guiding light for citizens, giving them hope and feeding their aspirations for the coming year. The budget is a substantial and objective method for estimating a government’s obligation to the nation and a public agreement on the acknowledgment of the right to live in a financially stable environment. Assessing government choices about apportionment and distribution of scarce resources among unlimited human wants, and whether sufficient resources are allocated to the citizens, here is a glimpse of how we at Indus Action see the way it affects the social issues of health and gender, education, and labour and livelihood.


This was due to the fact that men had more backup choices (primarily because they had greater flexibility in relocating also that many women were trapped at home during the pandemic due to increased domestic demands, for instance, the school closure.[1]Psychological well-being, the women of these households were worse off in terms of the impact the pandemic has had on them. “These job losses add to their woes,” she added.

The percentage of women in the rural workforce has witnessed an alarming drop. Mahatma Gandhi National Rural Employment Guarantee Scheme (MGNREGS), of which women constitute a large number of the beneficiaries and often depend on it for employment, has been reduced by 20 percent.

The quantum of this year’s gender budget, like previous years, has continued to remain below five percent of the total expenditure and less than one percent of the gross domestic product (GDP). The Government should acknowledge the fact that the socio-economic recovery will be impossible in the post-pandemic era if the women are continued to be left out.

Let us now turn our attention to the budget for 2022-2023 in terms of the Union government’s maternity scheme, Pradhan Mantri Matru Vandana Yojana(PMMVY).

“The rationale behind PMMVY (PM’s maternity scheme) is to provide partial wage compensation to pregnant women and lactating mothers for the wage loss suffered, thereby, enabling adequate rest before and after delivery, and; to improve health-seeking behavior among pregnant women, and lactating mothers.” Geeta’s story shows the harsh realities of our times and the dire need to focus on the increase in budget allocation, design & implementation changes of the scheme.

The allocation of ₹2,522 crore for the umbrella scheme last fiscal was almost the same as the allocation of ₹2,500 crore for the PMMVY alone the year before. For the financial year 2022-2023, the umbrella scheme has seen a total increase of ₹100 crore. Under the umbrella of Mission Sakti, the pledge to enhance women’s social and economic empowerment as well as to assure the care, development, and safety of children appears to be a long and tough road ahead.

Integration of initiatives under the Ministry of Women and Child Development through – Samarthya Scheme, without adequate funding will not add value to the main purpose without sufficient funds in the hands of the beneficiaries.

Digital divide vs. Bridging the Learning Loss : Where is our priority?


Remember the song ‘School Chalein Hum’? The note on which Class 11 student Saloni’s thoughts end, as she describes how school closures affected kids like her, reminded us of that song and inspired hope. The release of Ministry of Education guidelines for reopening schools cements this hope. Before we delve into the status of education today and deconstruct Budget 2022 for the education sector, let us take note of the most important voice that needs to be heard by all of us – the voice of children like Saloni.

2020 was a year that introduced words and phrases for adults like ‘Work from Home’, ‘Zoom meetings’, ‘Digital Divide’, ‘Lockdown’, and ‘Quarantine’. But what it introduced for our children was more anxiety, less social interaction, an immense learning loss, and an overall sense of gloom with educational institutes being shut for a majority of two years.

The education budget 2022 has been allotted Rs 1,04,278 crore, a rise of Rs 11,054 crore from the Rs. 93,223 crores of the previous year. However, the New Education Policy 2020 (NEP) had clearly mentioned 6% of the GDP as the investment required to ensure an improved quality of education in the country. There was a need for doubling the budget to ensure the provisions of the NEP (3.1% according to Budget Estimates 2022-23) to be carried out effectively, especially in a pandemic-ridden scenario.

Skilling, high-quality e-content development, agricultural universities having revised curriculums, a digital university, employment-generating activity-focus, like animation, gaming and comics, along with centers of excellence was the key focus of the education budget.

The focus of the budget speech and document is on the ‘digital’. While digital education/technology can be a means to an end, it can never be the end in itself. The key focus of the budget for school education is setting up digital infrastructure (PM e-vidya, regional languages) to combat the covid-pandemic induced loss. There is no mention of the monies being allocated for the implementation of such programs, nor on a monitoring & evaluation (M&E) mechanism to check the actual impact of the interventions being made. One example is the budget head for Children With Special Needs, where 25% of the blocks (1800/7231) are to be equipped with one resource center. However, there is no metric to define the success of this center.

It is crucial to understand areas where money is spent in Samagra Shiksha, as the flagship program has received Rs 37,383.36 crore, which is a 20% hike from Rs 31,050.16 in the 2021-22 Budget. However, it is important to note that the funds are 64.5% lower than the ask for 2021-22 for SmSA. 2022-23’s ask amount is not currently available. Additionally, state shares and overall SmSA budgets have seen a decline in many states over the past couple of years.

Under SmSA, ‘Quality interventions’ received 24% and ‘RTE entitlements’ received 16% of the budget in 2021-22, after the biggest chunk, which was teacher salaries. Thus, we’re constantly seeing that the budgetary allocations are not in-line with the stated objectives/larger outcomes. 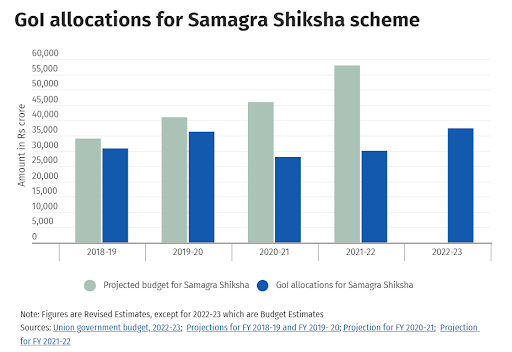 Targets mentioned in the budget outcome document for RTE Section 12(1)(c) for the year 2022-23 is 25 lakhs, which is a very good indicator for states to be able to receive reimbursements from the union government, pending proper documentation.Reopening schools ‘safely’, in accordance with GOI’s guidelines, is of utmost priority. In 2021-22, funds were allocated to orient teachers on school safety and to counsel children during the pandemic.

Under Samagra Shiksha, all states have also been allocated funds at Rs.2000 per school for safety & security measures. Many states and schools have been using this fund for maintenance of physical infrastructure. This is another area where a robust M&E system would be crucial to track the funding and it’s real utility. It is also crucial as there are vast differences across states in terms of priority allotted to interventions for school re-opening. 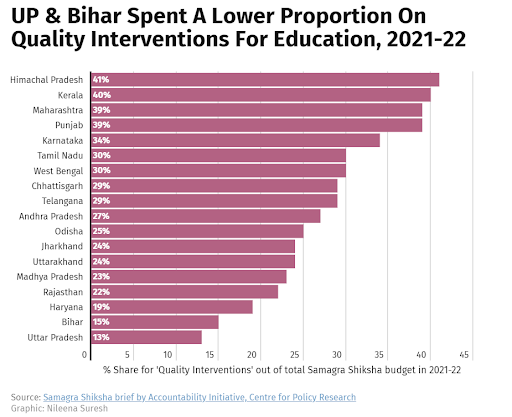 No trickle-down or social security cushion for the working class


In the first wave of the Covid+ Pandemic in India, we witnessed lacs of migrant workers walking on highways built under the Gati shakti scheme. The union budget 2022-23 clearly outlines the priority order for citizens. Migrant workers, and the working class of the country is lowest in pecking order of the citizens, the budget attempts to provide a financial cushion. The budget outlay for the Ministry of labour and employment has been increased from 13306 cr to 16893 cr. However, one of reasons for this increase is the plan to build the national database of unorganized workers for which INR 500 cr is outlayed. The outlay for the ‘shram portal’ is almost double of the previous year’s outlay, whereas the social security scheme expenditure outlay is either static or going down. The Platform and database are supposed to “track and facilitate delivery of benefits of various welfare schemes including those of social security to the unorganized workers.” According to the outcome budget (2022-23) of the GoI, 3cr workers are already enrolled in the Shram portal. We are yet to see the benefits of data collection of workers translating to benefits for them. However, there is no specification of social security benefits to 400 million unorganized workers in the budget. 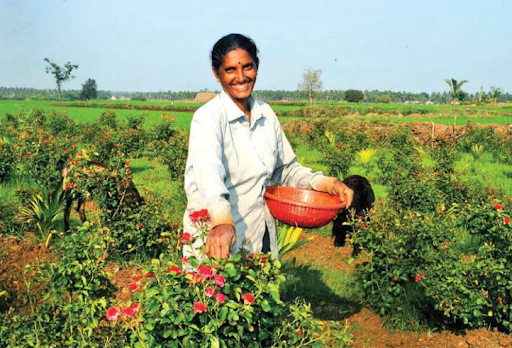 The budget has introduced cuts to food and fertilizer subsidies. With the cutting of subsidies, allocation under MGNREGA, and no new allocation of social security schemes for the working class. No urban job guarantee scheme has been announced even though urban employment is 8.16 percent, which is higher than the national average of 6.67%.

An urban employment guarantee scheme was even suggested by the people, which the government considers highest in the pecking order of citizens. In Spite of the recommendations by economists and industry, the focus of the Budget remains solely on self-employment and entrepreneurship and trickles down through infrastructure projects.

These cuts will worsen the already precarious situation with which the economically weaker citizens of the country are struggling. The assumption in the budget that the increased allocation for Capex to push infrastructure projects will lead to an increase in wages for workers is anyone’s guess. The migration to urban areas for employment won’t address the income shocks of economically disadvantaged families in the absence of an employment guarantee scheme, as wages in urban areas continue to be low. Therefore, the success of the Urban employment program (and its convergence with other schemes) in Kerala is a great blueprint for the center to adopt to bridge the inequality and create a cushion for the citizens already struggling with inflation and unemployment.

A comprehensive critique by Tarun Cherukuri 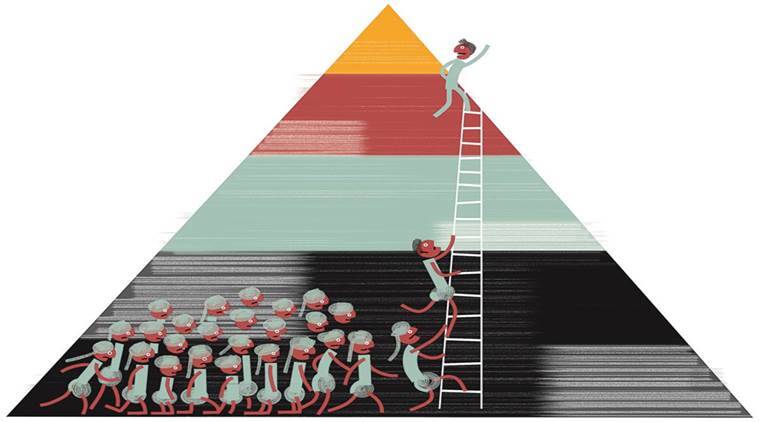 India’s budget for FY 22-23 seems to be betting heavily on the latter strategy of high growth, with limited investments in poverty reduction. This blunt and homogenous strategy across India with its wide distribution of per capita income (Goa at 5.2L per annum to Bihar to 51k per annum) does not square well with the findings of the paper. Negligible increases in education and health budget commitments in FY 22-23, and 25,000 Crore reduction in commitment to social protection through MGNREGA, calls for more focus to be laid on the welfare budget. States like Bihar, Uttar Pradesh, Jharkhand and others that are less than the national average of 1.63L probably need a disproportionate poverty reduction focus and those on the top tier like Goa, Delhi, Haryana, Tamil Nadu, Kerala need a growth focus. This differentiated strategy needs more visibility in the outcomes focused across poverty alleviation or social protection schemes in the Union budget.

Fiscal deficit cannot be a constraint to restore equitable investments in India’s most vulnerable citizens and families. Jan Sarokar, a social movement org recommends a 2% wealth tax and 33% inheritance tax of the top 0.1% to raise 11 lakh Crores of additional revenue required for poverty alleviation and social protection goals. We do have the monies as a society to offer universal basic income to every vulnerable Indian. What we are lacking is a streamlined vision. The union budget needs to focus more on eliminating suffering and offering dignity to Indians on the margins of poverty. I hope corrective measures are taken at a State level to redress the fiscal gaps in allocation at the Union level.

Union Budget 2022 – Assessing what was amiss